Minhazul Abedin Asif from Tongi achieved outstanding results in the three-day international T20 cricket tournament 'Khelo Bangladesh Vs Khelo India' in Delhi, India.
Moscow Cricket Academy starter Minhazul Abedin Asif won the Man of the Match and Game Changer medals at the Rotak Haryana Stadium in Delhi on June 5-6.
Returning home on Saturday, cricketer Asif said that in the first match of the match, Bangladesh scored 249 runs for 4 wicket loss and India scored 225 runs for 10 wicket loss. Bangladesh won by 24 runs. In this match, Asif became the man of the match by scoring 129 runs from 60 balls with 12 sixes and 6 fours. 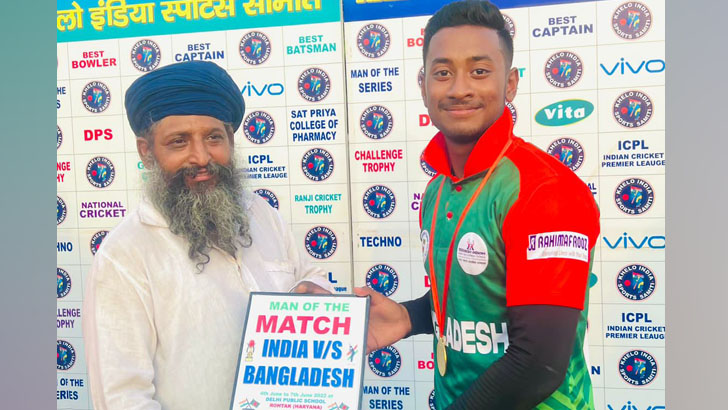 Bangladesh lost the second match, but Bangladesh won the third by 2 runs. The Bangladeshi team won the series.
The Khelo Bangladesh team was led by Khelo Bangladesh Secretary General Shishir Sikder, Perth Kibria, Mukti Khan and Captain Parvez Hasan. Sabbir Ahmed and Mahabubul Alam received the award for best fielder.
In this regard, Minhazul Abedin Asif said: "We are very happy with our team to be able to play well in T20 matches on foreign soil." We want to bring respect to the country by playing cricket.
When contacted in this regard, Shishir Sikder, Secretary General of Khelo Bangladesh, said that Asif has shown the performance of Ashajagania in India. The first time I saw him, I couldn't believe he could present such a beautiful game with a bat and ball combination. I think he will do better if he can play for the national team.
Incidentally, Minhazul Abedin Asif is the only son of Joynal Abedin, the organization secretary of the central committee of the Jatiya Party. He has previously played in various cricket tournaments in the country.
Kashem Mir (born 05 Oct. 1998) is a Bangladeshi blogger author. He is the founder of Bangla Zoom. He's official Facebook fan page name "Kashem Mir". He started his blogging career in 20…